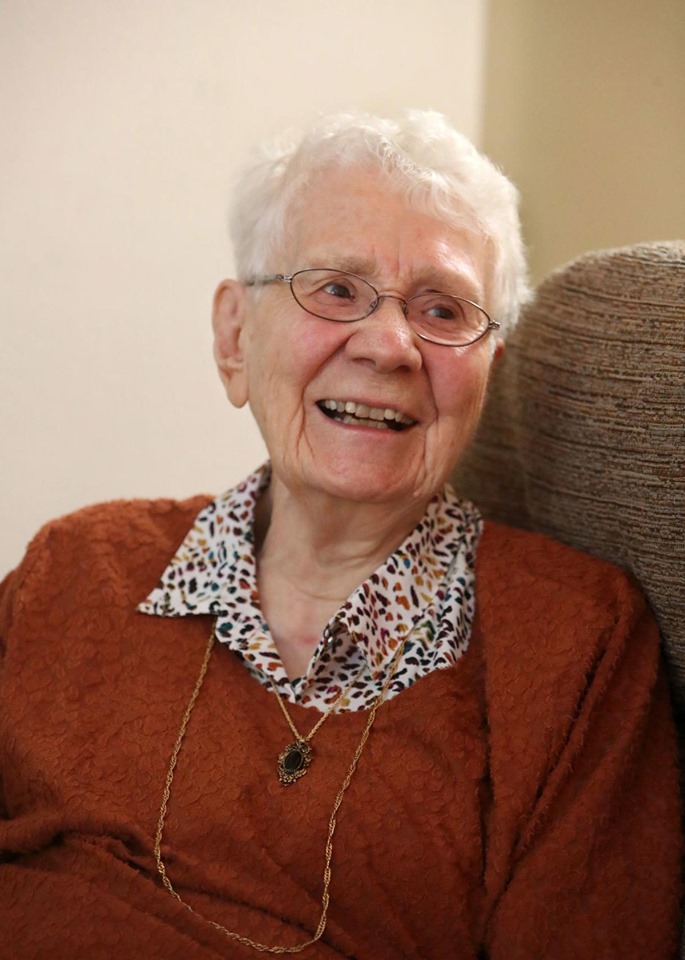 Jeanne Dell, in her nearly 100 years, has lived several lives. She’s taught in country schools and in town, spent 17 years as a farm wife and she was a caretaker and nurturer all her life.

“Grandma is always teaching us, no matter what,” said Karie Dell, one of Jeanne’s granddaughters. “From life, to school, to wisdom.”

Her family is celebrating her birthday next week — a party is planned for Sept. 28 — but she won’t officially become a centenarian until Oct. 23.

A snowy beginning
Despite being born in autumn, there was a blizzard that prevented her father, Bernard Melcher, from picking up his young wife, Lillian Axtell Melcher, and their firstborn from Aberdeen.

“Dad could not come the 30 miles from Wetonka to pick her up,” Jeanne said. “So they took mom to the train in Aberdeen and she rode the train to Wetonka where my dad met mom and me with a lot of blankets and a team of horses on a bobsled.”

Jeanne was eventually joined by younger brothers, and they had a childhood in the 1920s that was similar to that of Laura Ingalls — they went to school in a country school and helped on the farm.

An education
Country school only went to eighth grade, but Jeanne said she knew she wanted to be a teacher herself, which meant she needed to go to high school in Aberdeen.
During her first three years at Central High School, she stayed with relatives in town and went back to the farm on the weekend, Jeanne said. Her senior year, her parents purchased a farm just north of Wylie Park, and she was able to live at home.

The Great Depression was felt in Brown County like it was elsewhere, Jeanne said. Her family earned money through government programs — her mother sewed for government wages and her father helped build U.S. Highway 281 — but there really wasn’t a stigma to it because all of their friends and family were also taking advantage of President Franklin D. Roosevelt’s work programs.

Moving on
Jeanne Melcher graduated from Central High School in 1937 — their ceremony was held at the Brown County Fairgrounds grandstand. After graduation, she attended a one-year teaching program at Northern Normal and Industrial School while living at home, Jeanne said. Her tuition was $48 for the whole year. In fall 1938, Jeanne started teaching when she was just 18 years old.

The original plan was to live at home — the school was only 4 miles away — but Jeanne said wet roads made it tough to plan a trip to get her to school and back every day. Years before, her aunt taught at that same school, and boarded with a family — her father asked if Jeanne could do the same with the next generation of farmers living there.

Meeting destiny
Before her first day as a teacher, Jeanne met with members of the school board, and one brought his son, Harold Dell. It would be another eight years and a world war before the two would wed — but they did in 1946.

“His son came with him because he had gotten into a farm accident and so they had to call the older boy home,” Jeanne said. “So that’s where I met my future husband, on the steps of my school.”

Harold served in a supply capacity in the U.S. Army in the South Pacific — he didn’t see any action, but was proud of his service, Jeanne said. A World War II-era photo of Harold hangs in her living room at Bethesda Independent Living, along with a folded flag.

“He came home at Christmas time in 1945 on the night of my Christmas program,” Jeanne said.
Jeanne taught school until she had her first child, Stanley, in 1948, she said. Then she took on the duties of a farm wife.

“They talk about accidents or surprises: accidents are when bad things happen, surprises are good,” Jeanne said. “She was the most wonderful thing that happened.”

Back in the classroom
After 17 years as a farm wife, Jeanne said she got asked to take over a country school for a teacher who was ill. The teacher came back for a short while, and then was diagnosed with lung cancer after Christmas that year; Jeanne finished out that school year.

“After 17 years at home and not in the school, that was a baptism of fire,” Jeanne said. “New math had come in — it really was nothing new after you found out what it was. I had to go back to summer school.”

As a family, the Dells sat down and made the decision that Jeanne would go back to teaching, and back to school. By the 1960s, teachers were required to have bachelor’s degrees.

Through summer and night courses and support of her family, Jeanne earned not only a bachelor’s degree, but a master’s degree from Northern State Teachers College. Carol ended up taking some of the classes, too.

“I sat in on classes with her,” Carol said. “I got very familiar with the bench in Mewaldt-Jensen.”

Changes in education
Soon after she got back in the classroom, many of the country schools were consolidating to bigger towns, Jeanne said. She took up a first- and second-grade post in Columbia, a job she held until the school closed in 1987.

“They kept me for two years after I should have retired because they didn’t want to hire another teacher for only two years that Columbia would be in session,” Jeanne said.

But that doesn’t mean Jeanne stopped teaching. She essentially served as her youngest granddaughter, Abby’s, day care when she was little.

“I was 80 years old when my daughter came and said, ‘Do you suppose you and dad could take care of our baby?’” Jeanne said. “Then I could continue teaching. My refrigerator door became my chalkboard — we had magnetic numbers, magnetic letters.”

Dream home
Upon retirement, Jeanne and Harold Dell moved to town into what Jeanne described as her dream home — one with plenty of room for grandchildren to stay over whenever they wanted, just like on the farm.

“Regardless of what it cost, I had to have it,” Jeanne said. “I could still have the family gatherings.”

They lived there for 15 years before Harold passed away due to complications caused by diabetes, Jeanne said. She stayed there alone for another five years, until she got in a minor car crash — she has a visual impairment caused by macular degeneration — and moved into the apartment at Bethesda where she’s lived for 12 years.

Despite her diminishing eyesight, Jeanne is still an avid reader — she checks out audiobooks on CD from K.O. Lee Aberdeen Public Library and on flash drives from the South Dakota State Library. She has a special player with big buttons for the audiobooks on flash drive. She started telling others who live at Bethesda about the books, and soon a book club started.

“I wasn’t really in favor of (the name), but they all wanted Slow Readers, so that’s our book club,” Jeanne said.

On becoming a centenarian
Jeanne isn’t the only one in her family to see more than 100 candles on their birthday cake — her mother and aunts all lived long lives and her father had sisters that both lived past 100. So genetics have played a big factor in longevity.

“You have to accept a lot of changes without fighting them — bend or break,” Jeanne said. “In your marriage, you learn to compromise, although I think I had it pretty easy.”

Learn about our facilities first hand and see if we’re the right fit.