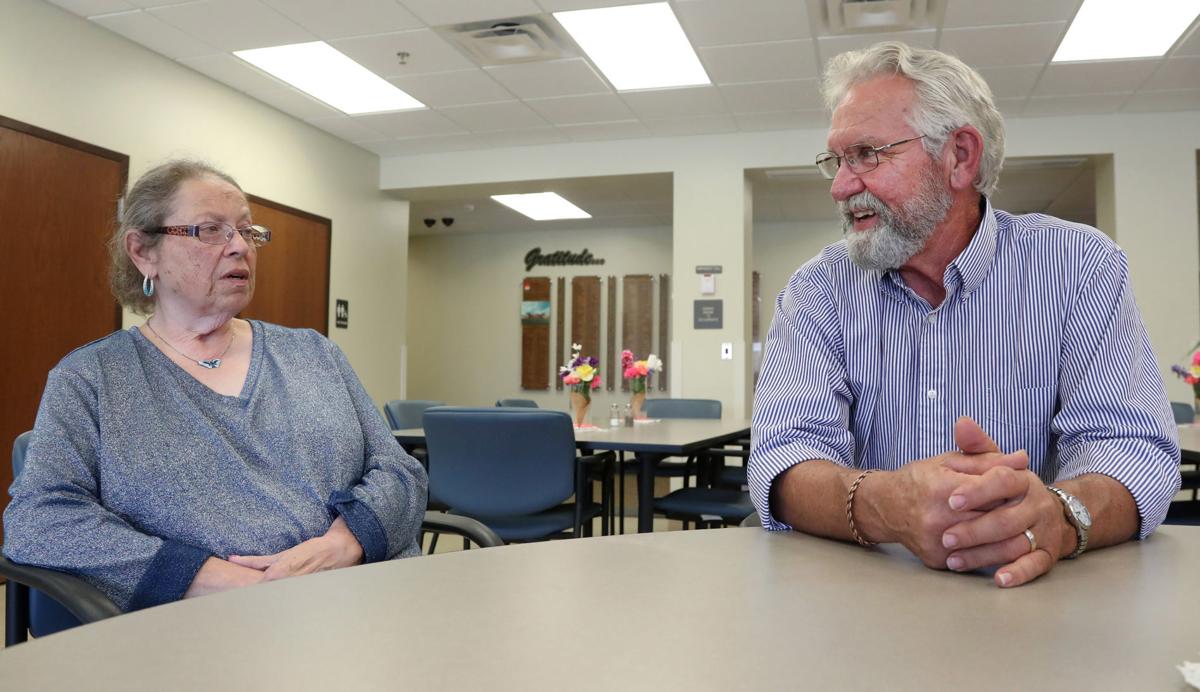 Jim Herman, right, talks with his wife Kathy Herman as they visit while walking about K.O.Lee Adult Day Health Center at Bethesda in Aberdeen. American News photo by John Davis

When caregivers need a break or loneliness lingers, adult day care is an option 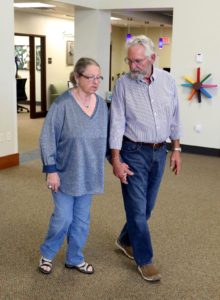 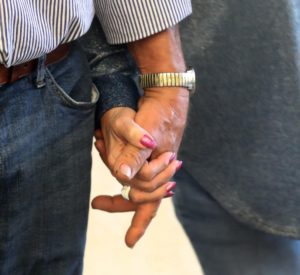 When Jim Herman first noticed something was not quite right with his wife Kathy, he didn’t think much of it. Forgetting about plans, getting disoriented here and there — these things happen with age, he thought.

But unfortunately, Kathy, like 50 million others worldwide, was suffering from dementia. She was diagnosed with Alzheimer’s disease, the most common form of the condition.

As with many who have loved ones experiencing the effects of memory and communication loss, Jim had a hard time accepting Kathy’s fate. “We don’t put the blame where it belongs. ‘Oh, she’s just being forgetful, everything’s fine,'” Jim said. “You end up kicking the can down the road for a year and a half, and it just gets to a point where you know something is wrong and you have to do something.”

For many that realization comes too late, when patients can no longer take care of themselves or the caregiver is too worn out to continue. At that point, there’s often no
choice but to send the person to be cared for away from home and family. That’s where K.O. Lee Adult Day Health Center at Bethesda comes in.

Tucked away in a residential area of town, the facility is easily overlooked and often misunderstood.

Unlike independent-living and assisted-living facilities, the day center falls under short-term care. Its mission is to provide individualized daily care that allows people to stay at home longer. It’s also a resource for caregivers — Jim, for example, does his grocery shopping and runs other errands while Kathy is at the center. It makes life a little easier on those who want their loved ones to stay at home, but don’t have the ability, physically or otherwise, to be on call 24/7.

“You have to be the last one up at night, the first one up in the morning,” Jim said. “It’s mama duty. It’s overwhelming.”

Jim and Kathy, both 69, have been married for 49 years. Jim spent hundreds of hours and traveled thousands of miles searching for a cure to Alzheimer’s that he ultimately never found. That’s when his doctor recommended the adult day health center, so he could have some relief in caregiving while maintaining a sense of normalcy for his wife and himself.

“Here’s an opportunity to still maintain a lifestyle and a home. It’s an alternative,” said Scott Eisenbeisz, CEO/director of Bethesda Aberdeen. “This is what people want. This is really why we’re pushing for this.”

The decision isn’t an easy one for anyone who has to make it. In the beginning, Jim struggled to leave behind his ninth-grade sweetheart for even a few hours at a time. “You’re like a new mom and dropping your kids off at day care. You cry all the way there and all the way home. I’ve done it,” he said.

But after the first day, those worries and anxieties washed away. “It’s a different, strange world and we all need education. We are so ignorant of this disease. It scares us to death to start with,” Jim said. “Then you meet people like this.” Currently, the facility sees about five to six clients a day. That number is usually higher during the winter months, Eisenbeisz said, but it doesn’t come close to the 65person maximum the facility allows.

“We need to get it out there that we have this program. This is here for that gap,” said Charity Pionk, director of K.O. Lee Adult Day Health Care. “It’s not diseasespecific, we take anybody who has any sort of nursing need.”
Guilt seems to be the major player in why more people don’t take advantage of the resource, according to Eisenbeisz.

“If they have a female spouse and for 30, 40 years she ran the household, they think, ‘Now I should be taking care of them,'” he said. “They feel like they’re just dumping them off.” But that couldn’t be further from the truth.

The great part about the program is that it’s specific to the needs of each client. If a caregiver only needs help for one hour on a Thursday afternoon, that’s fine. While there are some regulars at the facility, others stop by only when they need assistance with bathing, or when they’re feeling lonely and don’t want to be home alone. Costs are reasonable — $10 an hour and $5 per meal. And there’s no minimum or maximum amount of time a person has to be at the center.

“You’re not committing to a year or a certain timeline,” Eisenbeisz said. “Some clients come in two times a week. They can come in for two, six, eight hours at a time.”

For however long they’re there, clients have the freedom to do pretty much anything they’d like. Some take part in morning and afternoon group activities in the craft room, or play cards with the assisted-living residents from next door. Some watch their 2 p.m. TV programs or read the newspaper. Still others choose to spend their time sleeping in one of several reclining chairs in the nap room. On site, there is a salon room, where clients can make appointments to get their hair done; an exam room with medical staff on hand to help administer medication and other services; a gym with an underwater treadmill; an outdoor putting green and more.

Kathy loves it, according to Jim. She feels like she’s right at home, which is the goal of the facility.

“It’s care planned toward what that client is used to at home. It’s individualized,” Eisenbeisz said. “We’re not an adult baby sitter. It’s hard for us to put on pen and paper what we do. Just come and we’ll work with you, and you can see what we’re about.”

As hard as it is to see his wife struggle, Jim couldn’t be more grateful for the care she’s received under Pionk and the team at K.O. Lee Adult Day Health Center. It’s allowed him to keep the promise he made nearly five decades ago.

“When you get married, you say four words. For better or for worse. And it’s really hard (sometimes),” he said. “Because of Charity, I am here. These are special people. You don’t get these people off the streets.”

Learn about our facilities first hand and see if we’re the right fit.